You are here: Domů / Gothic Castle / Ruin in Landscape

A century of romanticism and progress

In the romantic 19th century, the ruins of Zvířice come to life on the canvases of painters and engravers. The mysterious ruins attract dreamers and poets to visit, such as Karel Hynek Mácha or the German writer Arthur von Nordstern.
Civilization marches forward at an inexorable pace, and the year 1865 brought the means of modern civilization under the animal hill: A railway is born, which mercilessly crosses the animal hill. Earthquakes caused by the blasting of rocks for the railway track apparently damaged the masonry of the tower, part of which collapsed in the winter of 1897. Thus, the characteristic image of the monument in the landscape changed permanently into the form we know today. 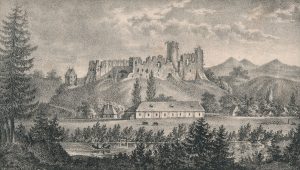 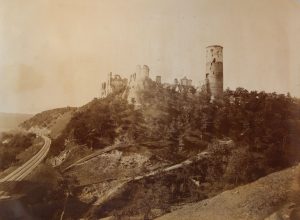 The year 1978 marked the destruction of the unique riding hall in Podhradí in the area in front of today’s parking lot. Under the conditions of the previous regime, the building, in its time in a poor construction-technical condition, was doomed: Instead of preservation interventions, it was decided to demolish the building.
The new life of the ruins was marked by the 70s and 80s of the 20th century, when the well-known summer camps of the Brontosaurus Movement took place in Zvířetice, during which a partial repair of the malt house on the outskirts of the castle was carried out and, above all, the cleaning and archaeological research of the castle well. A number of interesting finds were brought up from the depths of the past, for example the torso of a Renaissance cord or a heating basket.
The research also confirmed the core of the ancient rumor about a secret passage leading from the castle to the nearby village of Zvířetice: At a depth of 6 meters below the surface, an entrance to a “secret” underground room was discovered, connected by a narrow passage to the cellar of the old palace. Holes for bottles, preserved even after centuries, reveal that the space served the ancient inhabitants of the castle as a food cooler. 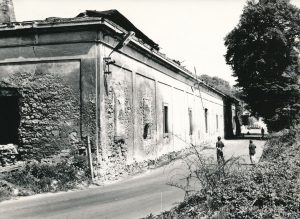 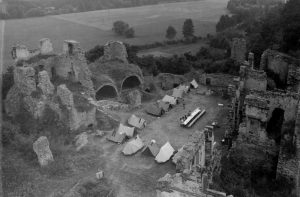 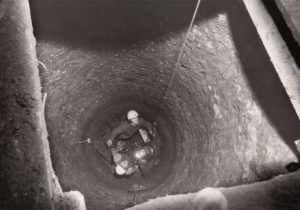 Since 2007, the monument has been owned by the City of Bakovo nad Jizerou, and its gradual restoration is beginning. In 2015, thanks to a grant from the European Union, the Zvířetice Tourist Information Center was opened in the village of Podhradí, in whose building you are now located and which became the base for the monument’s new life. A new bridge to the courtyard and a new external staircase to the tower were also built.
In 2015, a unique project of a virtual 3D reconstruction of the Zvířetice castle was also completed, which shows the monument in a real environment as it looked in 1683, at the time of its peak construction heyday after the completion of the under-castle stables, in the form of top computer graphics.